Colombia now has some of the most liberal abortion laws in Latin America. In 2008, Colombia induced an estimated 400,400 abortions, of which only 322 were legal procedures or Voluntary Interruptions of Pregnancy (IVE) performed in healthcare facilities.

What does the law say in Colombia?

In 2022, Colombia decriminalized abortion up to the 24th week of pregnancy (Ruling C-055). Therefore, people can request safe abortion services without meeting requirements or conditions. In this decision, the Colombian Constitutional Court recognized that abortion crimes violate the human rights of women, especially those who are vulnerable, like migrants. The particular mention of migrant population emphasises that it is not necessary to be a document resident of Colombia to access an abortion in the country [12].

A pregnant individual over 24 weeks of gestation who requires an abortion is only eligible for such a medical procedure if they fall under one of the three legal exceptions outlined in Ruling C-355/2006.

Even though Colombia decriminalized abortion, women and girls face difficulties accessing abortion services. For instance, La Mesa Por La Vida y la Salud de Las Mujeres received many cases in the first 100 days of the Ruling C-055. A sizable number of the people they attended were Venezuelan women, most of whom do not have a regular migrant situation [8].

How many abortions are performed in Colombia?

Data and numbers of abortions in Colombia

The Guttmacher Institute estimated that 400,400 abortions are performed annually in Colombia [7]. However, health structures safely terminate 10% of pregnancies [10]. Meaning most abortions in Colombia are carried out in clandestine conditions, leading to serious health complications for women, mental burdens, criminalization, and increased inequalities. Unfortunately, due to the stigma surrounding abortion, many abortion seekers are reluctant to seek medical help after having an abortion, which means that the actual number of unsafe abortions is likely even higher than the estimates suggest.

Criticisms of these numbers

The Guttmacher Institute’s estimate of abortions is the most widely recognized figure in the country because of its reliability. However, the study generated controversy among academics in the country; according to Rubio and his team, the estimate created was unrealistic, and the number was much lower. The Guttmacher Institute responded to these criticisms by presenting the methodological development of their study and confirming that, according to scientifically based data approximately 400,400 abortions occur in Colombia annually.

Other organizations have collected the number of abortions performed at their facilities to determine the prevalence of abortion in the country.

What do people in Colombia believe?

Opinion on abortion in Colombia

For more information about opinion of abortion in Colombia, there is a report available about abortion and stigma in Colombia.

Read the report about abortion stigma in Colombia

Who are the people who have requested legal abortions?

A study conducted by Profamilia provides demographic information on women who have requested legal abortions. Between August 2017 and 2018, they reviewed 15,016 abortion cases of women who have access to abortion using Mifepristone. Based on this information, abortion seekers were categorized according to their demographic characteristics [3].

*According to the study presented, the demographic information does not change when abortion seekers use a different abortion method

What abortion services are available in Colombia?

Abortion with Mifepristone and Misoprostol at medical centres

Abortion with Misoprostol at home or at medical center

Misoprostol is the most common method of abortion in Colombia. According to a study, Misoprostol is available in Bogota and the Coffee Axxis in some pharmacies without a medical prescription. However, the study also points out that pharmaceutical dealers do not provide adequate information on how to use and what to expect from the pills [1], and healthcare providers lack awareness of abortion methods.

Abortion services with pills can be accessed at Orientame and Profamilia

Telemedicine is an effective and safe way to have an abortion; Mia is a platform offered by Profamilia. Users can schedule a virtual appointment with a health professional who will provide counseling for each particular case.

Which abortion pills are available in Colombia?

Manual Vacuum Aspiration (MVA) is a medical procedure that suctions the contents of the uterus. The process is highly effective, and the person does not need to stay in the hospital. In Colombia, this method is practiced up to 15 weeks of pregnancy.

The case of Profamilia
The organisation Profamilia registered 6495 abortion by MVA between August 2017 to August 2018, during this same period of time they support 8523 with pills.

Orientame performs this method in Colombia. However, the procedure requires an appointment, and it has a cost of 655,000 Colombian pesos*.

After 15 weeks, healthcare facilities can perform other abortion procedures. For more information, it is necessary to seek medical support.

How does the context affect abortion in Colombia?

Abortion and the armed conflict

Colombia has been in a state of armed conflict since 1960. During that time, there have been different social changes and human rights violations, especially against historically vulnerable populations, such as girls, women, and the queer community. As a result of the recently signed peace agreement with the FARC-EP, the Peace Commission has begun clarifying some of the conditions that people with childbearing capacity have experienced, including the following:

Colombia has a low level of criminalization of non-consent abortions. Only 2.9% of abortion cases are filed with the Court in relation to this crime [5].

Venezuelans seeking abortions encounter more barriers to obtaining legal abortions. Not only do they face the stigma of abortion, but they also bear the stigma of migration. La Mesa por la Vida y la Salud de las Mujeres accompanied 154 women who requested a legal abortion between 2018 and 2021.

Abortion was legal in Colombia in cases of rape, incest, or danger to the pregnant woman’s life at the time. However, even when abortion was legal, it was difficult to obtain due to the high cost and lack of available providers. In addition, many women did not even know that abortion was legal under these circumstances [6].

How did the pandemic influence abortion in Colombia?

It is evident in the registered cases of La Mesa por la Vida y la Salud de las Mujeres that abortion seekers face barriers. Between March and December 2020, the organization dealt with 111 cases compared to 55 in 2018 and 76 in 2019. [6] 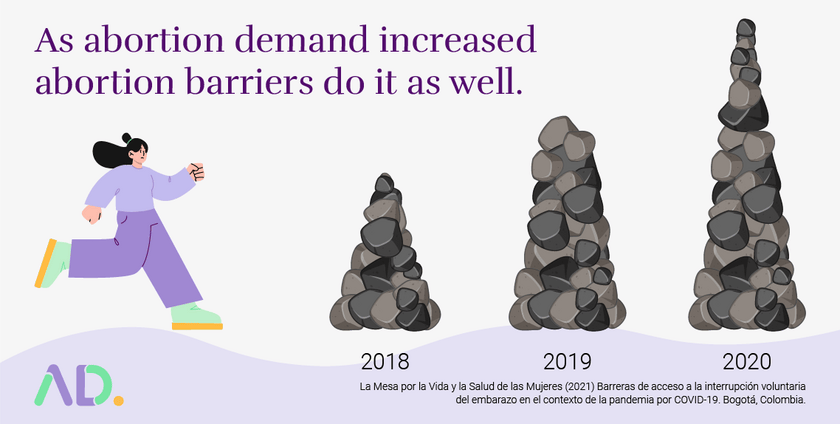 Abortion was legal in Colombia in cases of rape, incest, or danger to the pregnant woman’s life at the time. However, even when abortion was legal, it was difficult to obtain due to the high cost and lack of available providers. In addition, many women did not even know that abortion was legal under these circumstances [6].

What is the data gap in Colombia?

What we don’t know

Although the health system has some data, NGOs deliver more critical information. However, to draw a complete picture of the abortion situation in Colombia, studies would require answering the following questions.

*This page presents abortion data only for women and girls since the information available is usually not separated by gender. However, AbortionData.org acknowledges this limitation.

Where did we get the information?

[11] Statista. Favorability toward legalization of abortion in Colombia in 2021. Available at: https://www.statista.com/statistics/1292674/favorability-toward-legalization-abortion-colombia/

[12] Abortion in Colombia | All you need to know about abortions. (s. f.). https://safe2choose.org/abortion-information/countries/colombia

Added to wishlistRemoved from wishlist 0

Added to wishlistRemoved from wishlist 0